A breath of fresh air

Wendy Thomas of Nuaire discusses the importance of filtering the air in existing homes, particularly when the occupants are some of society’s most vulnerable

The Chief Medical Officer’s 2017 report, released in 2018, focused on air pollution as a major threat to public health and called for tougher standards to combat wide ranging health challenges. Clearly prevention is better than cure, so the long-term goal has to be to reduce air pollution, but in the meantime what should and could we be doing to protect those most at risk?

Air pollution: cause for concern?

Air pollution now regularly makes headline news, with 44 UK cities identified by a recent World Health Organisation (WHO) report as having air too toxic to breathe safely. While the focus remains on particulate matter, notably PM₁₀ and PM₂.₅, the presence of large quantities of NOx, the collective name for Oxides of Nitrogen (with NO and NO² having the most effect on the environment and human health) is also a danger. The main culprit for NOx emissions is motor vehicles, in particular diesel engines. The WHO annual mean target for NO² is 40 micrograms per cubic metre but in 2015 only six of the 43 UK air quality assessment zones met the annual mean limit value for NO².

What can be done to protect the most vulnerable?

Children and vulnerable groups, such as the elderly and those with underlying medical conditions, are at a disproportionately high risk of respiratory problems. Certainly, it can have a significant impact on people with asthma causing more frequent and more intense attacks. Reducing levels of particulate matter and NOx are essential in our cities and steps are being taken, but it’s a slow business as it requires major changes such as building schools away from main roads and phasing out diesel cars. But it can be done! German cities now have the right to ban diesel cars from their cities (70 German cities exceeded EU limits for NO² in 2017). What’s more it MUST be done as the population living in UK cities is set to rise to 92.2 per cent by 2030 (from 79 per cent in 1950). In the meantime, we need to take measures to protect those most at risk and not just those who can afford it. It’s a well-quoted figure, but worth restating here: every £1 spent on improving homes saves the NHS £70 over 10 years. Investing in our housing stock, especially our social housing where some of our most deprived live, is essential for our wellbeing.

Carbon filtration remains one of the best options we have for removing pollutants from our homes. Pollutant gases like NOx are attracted to the surface of activated carbon, where they are trapped through a process called adsorption. By installing carbon filters within the duct of a mechanical ventilation system, it is possible to control and dramatically reduce the level of pollutants entering a dwelling. Incorporating a carbon filter into a standard MVHR (Mechanical Ventilation with Heat Recovery) supply air valve that is part of a ducted ventilation system is an effective way to do this as long as access to the filter is quick and simple. Nuaire’s IAQ-VALVE, for example, has a simple ‘twist-and-clip’ bayonet fixture which enables quick release for easy maintenance that can be carried out every two years, without the need for tools. Most MVHR systems however, are designed for new build properties, as they require extensive ducting in voids and through ceilings and walls. So, while there is an effective solution for the 170,000 new homes built each year, the remaining 27 million existing homes in the UK have had no alternative carbon filter product for the retrofit market. Retrofit options are few and far between, but that is beginning to change as manufacturers react to demand.

The industry has turned to Positive Input Ventilation (PIV) incorporating a carbon filter.

PIV units, traditionally used as a cost-effective method of eliminating moisture from the home, gently pressurise a dwelling to expel stale and humid air through natural ventilation points; these are very common in older properties as most of you probably know! PIV units can be mounted in the loft area of a house. By adding a powerful carbon filter into a PIV unit, existing properties can benefit not only from reduced concentration but reduced pollution also. In the case of our own Noxmaster system, it removes up to 99.5 per cent of NO² and up to 75 per cent of PM2.5. While most existing properties can benefit from this combined PIV and carbon filtration system, it’s social housing providers that can use it to make the most immediate difference to the most deprived and vulnerable members of our society. Registered Social Landlords (RSLs) are, after all, the leading suppliers of affordable homes and providers of a wide range of vital welfare services to the most vulnerable in our communities. It’s time for action when it comes to air pollution and we have to look at both the long and short-term solutions. Reducing air pollution is the goal but can we really afford to wait that long? In the meantime, some of the most vulnerable members of our society living in high pollution areas are slowly being poisoned in their homes without even knowing it. 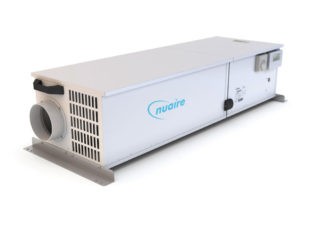