The first of two AHR-designed BTR (build to rent) apartment buildings in Salford has launched, bringing 90 new homes to the city.

Located on Stanley Street, on the banks of the River Irwell in and part of the English Cities Fund’s New Bailey regeneration area of the city, Legal & General’s 225-unit scheme, The Slate Yard, has now opened.

It is being developed in two phases, with the first phase, which comprises 90 apartments, launched to the market with rental customers now moved in.

The Slate Yard will offer residents a lifestyle that they would otherwise not have access to, even if they owned their own home.  This includes a 24-7 onsite team and housekeeping services, much like a hotel.

The residents will also benefit from favourable all-in costs, through significantly reduced energy costs, no letting fees, and free services such as WiFi and a car club. This equates to a saving of around £150 a month per apartment.  Green initiatives include solar panels on the roof, which provides the building with communal lighting and power, and secure cycle storage.

Customers are also, for the first time, being offered longer and more flexible tenancies to create greater occupational security, with tenancy options ranging from six months to five years.  They can also decorate their own homes and keep pets – options traditionally only linked to home ownership.

“The BTR market in the North West is a key growth area and we’re proud to launch this high-quality addition to the market. The completion of The Slate Yard represents a major milestone in the progression of the New Bailey masterplan and is another vote of confidence in the strong Manchester property market.

“The surge in popularity of BTR developments has reshaped the UK’s property market, particularly in regional markets like the North West, with significant developments breaking ground in Manchester, Liverpool and Leeds.

“Birmingham is seeing a number of projects come to fruition, while the London BTR market is much more mature.

“We certainly expect the demand for BTR to increase as more professionals choose city centre living over commuting.”

“AHR has responded very well to our evolving needs for the Slate Yard and it is great to now see our BTR vision come to life. For too long renters have found themselves at the mercy of expensive moving fees, unresponsive managers, and private landlords who often want to minimise upkeep costs and maximise rents.

“At the Slate Yard we have been able to offer significantly reduced living costs because of economies of scale, which a private landlord just wouldn’t be able to do. The scheme’s build maximises energy efficiencies and the combined weight of our negotiation power with external service providers allows us to save our customers thousands of pounds in bills each year.

“The improved service proposition and flexible leases has already attracted a wide range of residents. We have families, pet owners, empty nesters and young couples who have moved in, which is testament to how this new level of service and offering allows for all types of residents needs and gives them choice.  We want our customers to feel like they are in their home, not staying in someone else’s.”

“Designing a BTR development presents its own set of unique challenges and our team sought to find creative solutions to ensure that this development stood out in a highly competitive market. We did this by creating bright, spacious and attractive apartments whilst maintaining affordability and remaining on budget.

“The opening of The Slate Yard also signals the creation of a brand-new neighbourhood for city professionals between Salford Central station and Spinningfields. Creating this sense of community was a key priority in our design and we’re confident that the commercial and leisure elements of this scheme, together with its interaction with the River Irwell will shape a popular and vibrant new area in the centre of Manchester.” 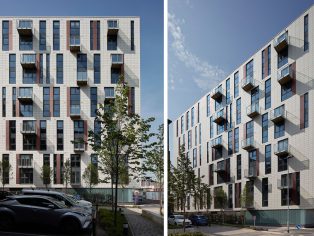