Planning consultants have criticised proposals from housing minister Gavin Barwell that housebuilders could be denied planning permission if they have prior schemes that have not been implemented.

Barwell, who was speaking at the annual RESI conference, said that his department was investigating making developers’ past records “a material consideration” in planning application decisions where there was “no record of building schemes out” where they had permission before.

According to the Minister, this would be a measure against developers who have a “habit of putting in planning applications, getting permission, getting uplift in their land value and then not doing anything”.

Brendan Hodges, senior associate partner at property consultancy Daniel Watney LLP, said it was “difficult to see how these proposals would work”.

“It is difficult to see how housing minister’s proposals to penalise developers with unimplemented schemes would work,” he insisted. “It would require changes to legislation and could end up with fewer homes built.

The consultants said that one main objection from the property industry to “use it or lose it” style proposals is that there are many reasons for developers delaying or cancelling schemes, such as funding falling through or projects no longer being viable.

“Where developers have to reapply for planning permission, decision makers can reconsider all material planning considerations, including changes to policy and local circumstances. Punishing developers for circumstances often outside their control would be unjust.

“If the government wants to see more homes built, the carrot approach is preferable to the stick. Reforming the Community Infrastructure Levy (CIL) to reward developers who deliver schemes quicker is a practical proposal that would not only help to deliver more affordable homes, but could also reap benefits for local authorities by giving them earlier receipt of the New Homes Bonus and council tax payments.”

Daniel Watney has proposed focusing on improving the efficiency of the planning process – which is partly addressed in the government’s proposed Neighbourhood Planning Bill – as an alternate way of delivering more homes. The firm has called for better resourcing for planning departments and a reduction in post-decision delays.

Reforms to the Community Infrastructure Levy (CIL) have also been proposed as a method of incentivising the delivery of permitted schemes. Reductions in CIL payments where schemes were built within a given timescale have been cited as a way of improving viability for developments that could potentially also allow developers to reduce the prices of new homes. 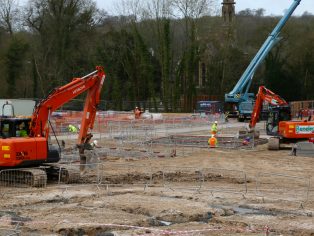