Following the complete makeover of the Chesterfield hospice’s family room earlier this year the company is to redesign and refurbish three counselling rooms at the hospice.

Providing specialist palliative and end of life care, Ashgate supports over 400 patients and up to 20,000 friends and family members each year. However, over 70 per cent of its income is reliant on local support.

“We were delighted to help out at the hospice which plays a vital role in the local community but couldn’t survive without significant support.

“As a result of updating the family room we’ve received wonderful feedback from patients and their families and are thrilled to help continue the new interior theme into three counselling rooms next year.”

The family room plays a crucial role for people to relax, often sleep and prepare food while visiting.

With a brief from the hospice to create a ‘home from home environment’ in the room, Designer Contracts’ interior design team focused on a calming and relaxing scheme of sages, lilacs and warm greys, incorporating several seating areas, to include sofa beds where friends and family could sleep when necessary. 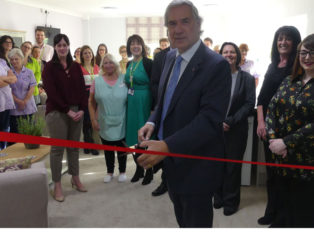