Over a year ago, in October 2019, Sir Martin Moore-Bick made a number of recommendations in conclusion to Phase 1 of the Grenfell Tower Inquiry, which he chaired. His aim was for these recommendations to be adopted by owners and managers of all residential buildings, to prevent such a devastating incident from occurring again. In this article I will specifically focus on the recommendations made relating to fire doors, and the best practice guidance that was subsequently published by the government to improve fire door industry standards.

During Phase 1 of the Inquiry, Sir Martin found evidence that ineffective fire doors ‘allowed smoke and toxic gasses to spread through the building more quickly than should have been possible.’ He used this finding to underline the importance of effective fire doors and to justify the cost of upgrading older doors and doorsets to meet current standards.

1) ‘Those who have responsibility…for the condition of the entrance doors to individual flats in high-rise residential buildings, whose external walls incorporate unsafe cladding, be required by law to ensure that such doors comply with current standards.’

2) ‘That the owner and manager of every residential building containing separate dwellings…carry out an urgent inspection of all fire doors to ensure they comply with applicable legislative standards.’

3) ‘That the owner and manager of every residential building containing separate dwellings…be required by law to carry out checks at not less than three-monthly intervals to ensure that all fire doors are fitted with effective self-closing devices in working order.’

Sir Martin’s recommendations have been taken into consideration in subsequent Government guidance and proposed legislation. For example, in January this year, the Ministry of Housing, Communities and Local Government (MHCLG) published Advice for Building Owners of Multi-storey, Multi-occupied Residential Buildings, which included advice on assurance and assessment of flat entrance fire doors.

Specifically, the MHCLG advice for buildings where the wall system does not meet appropriate safety standards is to inspect the building’s fire doors as a matter of urgency. It also insists that any non-fire-resisting doors (such as non-fire-resisting PVCu doors) should be replaced immediately with doorsets that are third party certificated as providing at least 30 minutes’ fire resistance.

While there is huge variety in the types of fire doors available, certified timber fire doors, which were subjected to government fire tests in 2019, were effective at meeting and exceeding the minimum burn time requirement of 30 minutes.

The BWF Fire Door Alliance concurs with the MHCLG advice, based on the Independent Expert Advice Panel’s recommendations, which states the best way to raise the standard of fire doors and fire doorsets across the board is through third-party certification and that all fire doors in any building type should meet this standard to guarantee safety as far as possible. We are lobbying for this to be mandatory as part of the Building Safety Bill.

The Fire Safety Bill proposes strengthening fire safety legislation for all multi-residence buildings in England and Wales which fall under the Regulatory Reform (Fire Safety) Order 2005 and confirms that flat entrance doors fall under the legislation.

The Building Safety Bill, meanwhile, proposes changes to existing legislation such as the Building Act 1984 and Housing Act 1996 to establish a new fire safety regime for “high risk” buildings. It introduces the concept of the Accountable Person’s Safety Case Report, which needs to be submitted to, and approved by, the new Building Safety Regulator, while also documenting the Accountable Person’s strategy for managing safety risks associated with the building for which they are responsible, including fire doors.

To ensure fire doors continue to perform as they should in the event of a fire, the BWF Fire Door Alliance believes checks should be carried out regularly – at least once every six months – and newly occupied buildings may require more frequent checks in the first year of use. Doors where traffic is high, like in communal areas, are likely to be more susceptible to damage and should be checked more frequently than other doors in the building, for example, once per week or month depending on usage.

Sir Martin’s fire door recommendations are a solid foundation for driving up standards across all buildings, but unless they are acted upon urgently, lives will continue to be put at risk.

During the summer, the Fire Door Safety Week campaign found that over half (52%) of UK local authorities responding to a Freedom of Information (FOI) request reported delays to planned fire door maintenance and replacement in the first half of 2020. The number rises to 60% when inspection delays are also factored in. According to the data obtained from 147 local authorities that own and manage their own housing stock, at least 26,318 fire doors were scheduled for maintenance or replacement between January and June 2020, but 16,580 did not progress – meaning 63% of individual planned works were delayed until at least the second half of the year, affecting a minimum of 9,954 individual properties.

Does your organisation know how many fire doors meet standards, and does it have plans for improvements? To help, the BWF Fire Door Alliance website has a wealth of best practice guidance when specifying, maintaining and installing fire doors. Visit https://firedoors.bwf.org.uk/ to find out more. 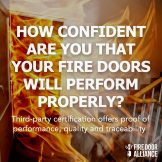 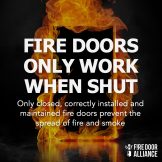 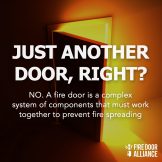