An eco-house has been set alight to show the importance of flame retardant materials in construction.

Envirograf based in Barfrestone, near Deal, welcomed industry insiders to watch as they set a living room and bedroom on fire. Having built the structure in two days using a modular construction technique, the furniture in the two rooms was torched. Not only did the fire not spread into other rooms, but the walls of the rooms remained stone cold throughout.

Envirograf’s managing director, 89-year-old Derek Ward, was on hand to give demonstrations beforehand of some of the materials his company produces.

“So I thought ‘We’ve got to develop something that will not burn down’. We tested other people’s products and they all burnt. With us, we built these panels which can be made to any height. They can be in our furnaces for three-and-a-half hours and the panel will remain at 40°C while the furnace is at 1250°C. Nothing happens to it, it will just sit there.”

Research and development work on the panels has been underway for two years, beginning two years after Grenfell burnt down. Following the rooms’ gutting, all of the furniture and interior panels were removed alongside damaged external cladding. Afterwards, a team worked to replace the damaged items and plasterboard.

Mr Ward added: “For anybody that has a fire in their house, within literally four hours they can be in bed again and relaxing in the room like nothing happened. The house itself only took two days to build – the panels just slot together so it’s really quick.”

Another bonus of the Envirograf construction technique is that the homes can be built raised off the ground. With all the recent flooding – such as in China and Germany – these houses can actually provide some defence against floods.”

As part of the fire resistant construction technique, vents are installed in the walls to allow air to circulate and smoke to be ejected in the event of a blaze.

One inspector described it as “the best eco-house I’ve seen”, as the ventilation system allows fresh air to be inducted into the house without opening a window and letting out heat. The house is constructed using a range of Envirograf’s passive fire protection products, which includes sturdy but homely fire doors and coverings for electrical goods. Another item is fire resistant paint, which can be used on cladding and around the home – even on artificial flowers – to contain any fires that may occur. 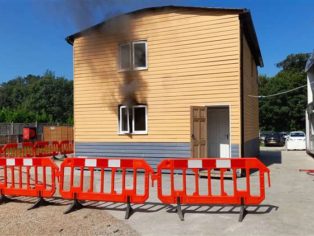