Households in temporary accommodation at highest level since 2007

Nearly 85,000 households were being accommodated by English councils in B&B hotels and hostels at the end of March – the highest level in over a decade and a year after a piece of flagship legislation to combat it came into force.

The 84,740 households in temporary accommodation includes 126,020 children, the Ministry of Housing, Communities and Local Government said. Two thirds of the total, some 56,280 of the households are in London.

This is the highest number of households in temporary accommodation since mid-2007 and compares with a low of 48,010 in 2010.

The figures includes 810 households who have been in B&B hotels for longer than the six-week statutory limit, but at least this is 50 households below the 860 figure at the end of the previous quarter.

The number of households considered to be newly homeless rose by more than 3,000 in the first three months of 2019, the Government’s statistics show. Between January and March, some 32,740 households were assessed as being homeless, up 11.2 per cent from 29,430 in the previous quarter.

The most common reason for loss of their last settled home was friends or family no longer willing or able to accommodate them, while the second largest category was the ending of an assured shorthold tenancy in the private rented sector.

The Homelessness Reduction Act 2017 placed new duties on councils to intervene earlier to prevent homelessness. It has been in force for more than a year, but two thirds of councils have said they cannot afford to comply with it.

A rural problem too

In addition the number of households classified as homeless in rural areas has almost doubled over the past year, according to an analysis by the Campaign to Protect Rural England. It said 173,584 families were on waiting lists for social housing in areas where councils built just 1,336 homes for social rent in 2018.

Back in 2017, the Local Government Association was reporting that a chronic shortage of affordable housing was forcing cash-strapped councils to spend more than £2 million a day on temporary accommodation for homeless families. At that

time, 75,000 households were placed in TA – 10,000 fewer than now. The ongoing use of TA is estimated to have cost councils over £5bn in the past five years.

The Government took a fairly bullish response to the release of the figures. “The Homelessness Reduction Act is the most ambitious change to homelessness legislation in decades,” said Luke Hall, the Minister for Homelessness.

“Figures show that progress is being made. The act is helping people earlier, so they are not having to experience homelessness in the first place. There is still more to do though, which is why we have committed a record investment to ending homelessness and rough sleeping for good.”

The department said another £54m would be spent in 2020-21 to help reduce homelessness and rough sleeping, a 13 per cent increase on the current year.

Household made homeless every four minutes

However, this did not prevent further criticism from the housing charity Shelter, who said one household has become homeless every four minutes in England in the last year, and it called on the Government to invest in a new generation of social homes.

“Cripplingly expensive private rents, frozen housing benefits and lengthy waiting lists for social homes are pushing people to the sharp edge of a housing emergency, which won’t go away without genuinely affordable homes.

The charity Crisis said it welcomed the success of the Homelessness Reduction Act (HRA) in preventing nearly 60,000 households from becoming homeless in England, but called on the Government to address the causes of the issue.

“We know we can do better,” said Jon Sparkes, the chief executive of Crisis. “The HRA has great potential, but it can only go so far when people are being pushed to the brink, struggling to meet the cost of housing. The Government needs to tackle the root causes of this issue, investing in building more social housing and restoring local housing allowance, so that it covers the true cost of renting.”

Crisis said more than 7,000 households currently lived in B&Bs and were unable to access safe and secure accommodation. “Our clients tell us of damaged and even dangerous conditions, where they lack basic cooking and laundry facilities and face the constant pressure eviction at short notice. No one should have to live like this,” Sparkes said. 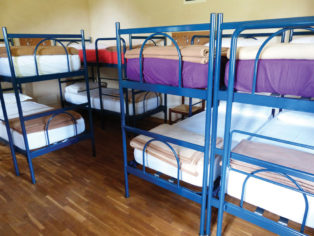