By sharing a joke, telling a story or demonstrating a skill, residents of a Stafford and Rural Homes (SARH) Independent Living Scheme have been tackling an issue that’s an increasing concern for many older people.

As part of a series of events to mark the recent Dementia Action Week, SARH customers at Jubilee Court in Stafford were invited to a Bring and Share session at the popular ‘extra care’ scheme.

Over coffee and tea, they were able to share some of their life experiences or simply entertain their friends.

“In keeping with the theme of Dementia Action Week – ‘Inclusion’ – those taking part also had the opportunity enjoy a range of activities including making crochet flowers and decorating cakes.

“They were also joined by local Police Community Support Officers who offered advice on staying safe in the community. There was also plenty of information on hand about support for those living with dementia, which noted the importance of talking about and sharing problems and anxieties, and ways of making the most of life too.

“The highlight though was hearing from our customers, who told stories and talked about their lives and experiences.”

Similar events were also held at SARH Independent Living Schemes in Marston Court and Doxey House, Stafford, reflecting the housing association’s commitment to bringing communities together. They were open to, and attended by, a wide range of customers, not just those living with dementia.

“We know the fantastic contribution older people make to our local community and it was wonderful to hear about their skills and experience in such an informal and friendly setting.

“More importantly, it gave SARH the opportunity to show them that, by sharing their worries, help is available, and a problem shared is a problem halved!” 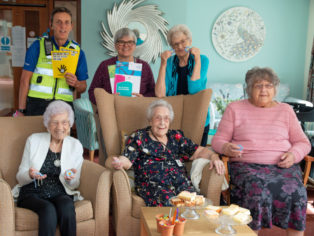