Social housing provider Onward Homes has been honoured for its part in regenerating the Hattersley and Mottram Estate.

The social landlord received the Neighbourhood Transformation Award at the UK Housing Awards in recognition of its ongoing strategy to make the estate a better place to live.

“We are proud to have won this award which recognises all the hard work, not just of Onward Homes, but of everyone living and working in Hattersley and Mottram.

“We have been privileged to work with the community for the past 13 years and this win is just as much for them as it is for us.”

Onward was commended for its wide-ranging strategy to regenerate the estate which included delivering a broader mix of housing, reversing the population decline, delivering sustainable community facilities, bringing in private investment and engaging the community.

For the first time since the estate was built in the 1960s, Hattersley’s population is growing, with an eight per cent increase since the regeneration project began in 2006. Satisfaction levels amongst residents has also risen, from 70 per cent in 2008 to 89 per cent by 2014.

Onward Homes’ approach to regenerating the estate has now been adopted as a best practice guide for housing estate regeneration.

Its efforts were praised by judges, beating off stiff competition to receive the award at a ceremony in London.

“This is just the beginning of a new era for Hattersley and Mottram, we look forward to an even brighter future for the estate and the whole community.” 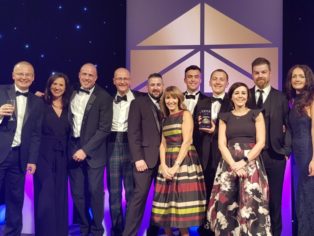