A proposed private member’s bill addressing the energy bill and climate crises is being put forward to the Scottish Parliament. The Domestic Building Environmental Standards (Scotland) Bill is out for consultation until 27 July 2022. Alex Rowley, MSP for the Mid Scotland and Fife Region, is proposing the Bill which calls for all new housing in Scotland be built to the Passivhaus standard or to a Scottish equivalent. The Bill would apply to every new home built by councils, housing associations or the private sector.

”Update building standards to ensure that, within the next 5 years, all new housing is built to Passivhaus standards (or an agreed Scottish equivalent), to create healthy homes for people while also taking into account whole life carbon costs and environmental impact” (page 16).

“A move to the Passivhaus ‘gold standard’ for all new-build homes would be radical, ambitious, practical and forward-thinking. It would future proof homes and prevent them from having to be retrofitted in the near future, upskill the construction sector and make Scotland a leading player with exportable skills and knowledge.”

“When many worry about the cost of living and accelerated cost of household energy bills, this proposal could not come at a better time for the country.”

The Domestic Building Environmental Standards (Scotland) Bill is out for consultation until 27 July 2022.

In June 2022 the Scottish Government announced its Building a net zero future strategy for new build homes, outlining its proposals for new building regulations, which aim to ‘cut emissions of all new-build homes by nearly a third’.

“While the proposals are a step in the right direction, they do not include the rigorous targets, modelling methodology and certification quality assurance of the Passivhaus standard and so do not adequately address the issue of the building ‘performance gap’.  Backed with over 30 years of international evidence, Passivhaus is a tried and tested solution to deliver net-zero-ready homes in Scotland optimised for a decarbonised grid and augmented for occupant health and wellbeing.”

“While we welcome the direction the Government is working in, the proposed new standards do not go far enough to tackle inefficient housing and reduce greenhouse gas emissions. They also miss a crucial aspect of our Bill which is the need to close the ‘performance gap. Unless we introduce a verification process for energy efficiency, any changes to building regulations will remain inaccurate due to the gap in what an EPC rating suggests a building can achieve in terms of energy efficiency and what it actually achieves. It is a welcome improvement but it does not bring the standard of modelling and testing up to the same standard as Passivhaus quality standards.” 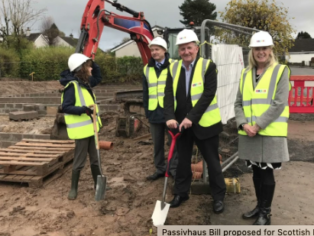