Raising the bar with fire and CO alarms

Wide ranging new requirements recently confirmed by the Scottish Government call for a consistently high level of smoke, heat and CO alarm provision to be applied across all housing, and a review of Building Regulations should improve standards in England too, as Kidde Safety Europe explains

Following the Grenfell Tower fire, the Scottish Government brought forward its consultation on fire and smoke alarms, as well as CO alarms, in housing. The result is a major change to the ‘Tolerable Standard’ for all housing tenures, taking effect from February 2021, giving housing providers and owners less than two years to install or upgrade fire and CO alarms in all their properties. In essence, the minimum safety standards currently in place for private rented properties will be extended to all other tenures including social housing and owner-occupied homes.

Private rented housing in Scotland must already meet requirements based on the BS 5839-6:2013 Code of Practice ‘Category LD2’ level of protection, mirroring Scottish Building Regulations for new-builds, change of use and extensions. This means a system of interconnected smoke and heat alarms, including smoke alarms in principal living rooms and heat alarms in kitchens, as well as smoke alarms in circulation areas on each storey. In addition, CO alarms will also be required in all homes with combustion appliances. The Scottish proposals consider that: “it makes practical sense to combine installation programmes for… smoke alarms and carbon monoxide alarms together”. More attention should be paid to the positioning of alarms for audibility, as well as early detection of fire or carbon monoxide – something that current standards and guidelines fail to address properly. Combining smoke, heat and CO alarms can provide more coverage cost-effectively, ensuring that occupiers are awoken and alerted wherever they are in the property, whatever the risk.

Kidde’s Smart Interconnect facility, for example, enables all its Firex smoke and heat alarms, and its hard-wired mains CO alarms, to operate as a comprehensive domestic system. Here, all the alarms sound when one is triggered, with different, distinct alarm sounder patterns for carbon monoxide or fire – an essential facility – supported by different display messages on the digital CO model. So, without the need for any other hardware, occupants are automatically alerted to the specific hazard enabling them to respond quickly and correctly.

The new Scottish measures herald a fresh, straightforward approach to fire and carbon monoxide safety, recognising the key role of alarms as the first line of defence, providing critical early warning at low costs. They make occupants (and therefore also alerted fire and rescue services) aware of fires sooner and at an earlier stage in its development, reducing risk of injuries, deaths and property damage. Kidde welcomes the new measures and calls for a similar approach to be applied throughout the UK. In particular, pressure is now on to upgrade regulations for private rented properties in England, including CO alarms with all combustion appliances, not just solid fuel as at present, and to extend the requirements to social housing.

Similarly, Building Regulation guidance in England desperately needs attention, recognising that it covers changes of use – even where planning ‘permitted development’ applies – extensions and some alterations. Approved Document J should again require CO alarms with installation of any combustion appliance, not just solid fuel. And Approved Document B (AD B) is now under review following the Grenfell Tower fire and Dame Judith Hackitt’s condemnation that it is “not fit for purpose”. Currently, AD B relies on BS 5839-6, stating that: ‘All new dwellinghouses should be provided with a fire detection and fire alarm system in accordance with the relevant recommendations of BS 5839-6:2004 to at least a Grade D Category LD3 standard’. In addition, AD B recommends a heat alarm only where the kitchen area is not separated from the stairway or circulation space by a door.

However, this AD B guidance conflicts directly with the ‘relevant recommendations’ of the current BS 5839-6:2013 – the very standard that it is based on. Notably, BS 5839-6:2013 recommends a minimum Category LD2 (including heat alarms in all kitchens) where Building Regulations apply. So, AD B guidance on fire detection and alarm systems in dwellings must now be completely reviewed to remove the confusion of conflicting recommendations and to adopt the relevant recommendations of BS 5839-6 correctly, including a minimum level of protection of Category LD2. The right provision of alarms – to detect fire or CO, and also ensure that occupants are alerted throughout the home – is critical. Certified CPD presentations and documents such as Kidde’s ‘Guide to regulations & standards’ can help clarify the issues involved. 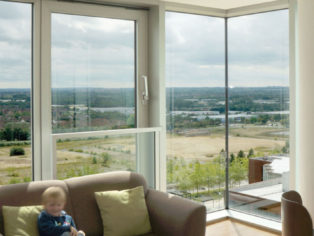