The Government’s emergency support programme for rough sleepers helped more than 30,000 people during the pandemic – eight times the number thought to exist by officials.

The ‘Everyone In’ scheme to find accommodation for rough sleepers was rapidly set up in late March 2020, in the early days of the crisis. It has been hailed as one of the main successes in the Government’s response and this assessment has been confirmed by a Whitehall spending watchdog.

The National Audit Office found 33,139 people were helped between March and November last year, whereas officials at the Housing Ministry were relying on a survey which had identified just 4,266 rough sleepers.

The Everyone In campaign required local authorities to immediately house rough sleepers and those at risk of rough sleeping to protect their health and stop wider transmission of Covid-19. A wide range of emergency accommodation was found at short notice, including thousands of empty hotel rooms.

The NAO say that local authorities expect to spend around £170m by the end of March this year on rehousing rough sleepers, with the programme paid for by Government grants, existing homelessness funding streams and councils own resources. Roughly 23,000 people have been found long-term accommodation.

Meg Hillier who chairs the Public Accounts Committee, welcomed the success of the Everyone In scheme but warned the Government it must now find a new strategy if it is to achieve its goal of ending rough sleeping by 2024.

“MHCLG, local authorities and the voluntary sector all rose to the challenge. Their staff went the extra mile and may have saved hundreds of lives. But MHCLG can’t rest on its laurels and it was caught off guard by just how many people needed help. Now rough sleeping is on the rise again, and the pandemic is far from over,” she said.

Covid-19 claimed relatively few lives among the rough sleeping population in England during the first wave. The NAO report found there were 16 deaths among homeless people linked to the virus upto June last year, but overall an estimated 266 deaths were avoided.

“Our ongoing Everyone In programme has protected thousands of rough sleepers from Covid-19, so we are pleased the National Audit Office recognises its achievement.” 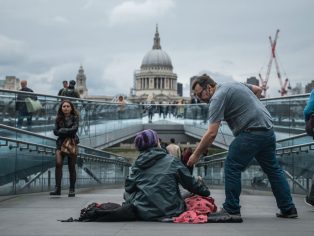