Hertfordshire-based Thrive Homes is celebrating the completion of its first housing development after four families moved into their new, affordable homes for rent.

The ambitious housing association, which owns and manages more than 4,000 rented homes in Hertfordshire and Buckinghamshire, has a strategy to move into development and sees its first new-build properties as a real landmark.

It has built two two-bedroom flats in South Oxhey, Watford, and two two-bedroom homes in nearby Mill End. Both developments replaced bungalows which had to be demolished following fires.

The one-bedroom bungalows originally on the sites had been designated as homes for the elderly, but Thrive Homes identified a shortage of general needs properties in the area as there was a waiting list of 111 people needing family homes.

It has built the family-sized properties during its ‘Year of Ambition’, which it declared to mark its fifth anniversary to inspire staff, residents and partners to think bigger and better.

Jo Barrett, Operations Director of Thrive Homes, said the completion of the four affordable rent homes was a significant milestone as the organisation looked to focus on more development as part of its 2014-19 strategic plan.

“We identified a real need for this type of family home and saw this as a perfect opportunity to develop quality properties suitable for affordable rent,” she said. “We listened to local people when we put together the plans, and are delighted with the positive feedback we’ve had.

“We’re also pleased to have completed our first new-build properties during our Year of Ambition. We pledged to be inspirational and ambitious, and the completion of these developments is a key part of that journey.

“Our next five years will see us motivated to do so much more, with the aim of furthering our goals to create thriving communities with life choices and opportunities for everyone. Now our first developments have been completed successfully, we will be focussing on more new-builds.”

Before the new tenants moved in, Thrive Homes invited colleagues, partners and neighbours to view the new properties, as a ‘thank you’ for their support during the building work.

“These much-needed family homes have clearly been built to a high standard, and I’m delighted Thrive is helping to meet the need for affordable homes in the area. I wish the new tenants every happiness.”

New tenant Tracey is looking forward to life with her two youngest children in her new two-bedroom house in Mill End. “Moving here is wonderful for my children and me. It’s a lovely neighbourhood and a beautiful new home,”

Sammy-Jo has moved into a two-bedroom flat in South Oxhey with her toddler, said:

“I’m really excited about living here. I’m sure it won’t take long for us to settle in and we’ll be really happy.”

“As a local company, we’re proud to have completed the work on these properties. We know they’ve been built to top quality standards and they’ll make wonderful family homes for many years to come”.

The homes were built in partnership with Circle Housing, and Andrew Start, Development Manager at Circle, said:

“It’s been great working with Thrive on this project. We’re pleased to have been a part of the development of affordable family homes which serve the needs of their communities.” 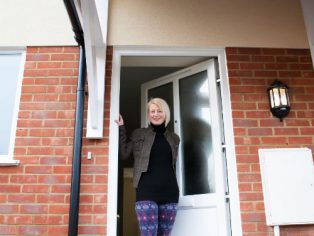