An innovative water management scheme, designed to ease pressure on Sheffield’s sewer system, is being proposed as part of plans to build 148 new homes in the city.

The sustainable urban drainage system – or SuDS – would reduce the flow of water in Kirkbridge Dyke, in Manor Fields Park, when there is increased flow due to heavy rain.

A permanent shallow pond and new wildlife habitat would be created within the park. Normally this would hold small volumes of water, supporting new biodiversity, but in a storm, it would temporarily rise within the basin, before dissipating naturally into the ground after the storm has passed.

The new capacity created further downstream in the Kirkbridge Dyke would then accommodate run off water from the proposed new homes at Harborough Rise and in and around Manor Park Avenue – rather than into the sewers.

Creating upstream water storage above the points of discharge from a development is not typical.  The new approach is a result of the watercourse and sewer modelling undertaken during the Three Brooks Flood Project – part of the Sheffield Flood Risk Management Plan.

The project is an example of working with the opportunities of an area in enhancing the role of open space for water management, whilst reducing the need for underground engineered surface water storage that would have been the typical approach.  It also creates new natural assets for the local community to enjoy.

To views details of the planning application, visit:

https://planningapps.sheffield.gov.uk/online-applications/ and enter Kirkbridge Dyke as key words.  Anyone wishing to comment on or ask questions about the proposal can do so by emailing customerservices(Replace this parenthesis with the @ sign)sheffieldhousingcompany.co.uk

More traditional SuDS schemes are already taking around 100,000 cubic metres of run off rainwater – the equivalent of nearly 10 million toilet flushes, 2.5 million showers or 1.25 million loads of washing.  This has significantly reduced flood risk at times of unusually wet weather – such as the pre-Christmas downpours.

Its goal is to improve the quality and choice of housing across the city, while creating jobs, encouraging investment and supporting the communities in which it works.

Manor Fields Park has evolved, over the past 20 years, from derelict land.  It is semi-natural, with large areas of biodiverse vegetation, play facilities and an extensive network of paths.   It is dominated by the shallow valley of the Kirbridge Dyke in which the SuDS would be located.

The bowl like nature of the site lends itself to the initiative and the wildlife opportunity it presents.  Sensitive integration within the open space could provide a new wetland habitat, wetland channels, cascades, a meadow and tree planting.

In developing the scheme, consultation has taken place with Yorkshire Water and the Environment Agency and Sheffield City Council Lead Local Flood Authority.

Councillor Bob Johnson, Cabinet Member for Transport and Sustainability at Sheffield City Council, said:  “It’s vital that the new houses we build in Sheffield are designed to be both quality homes now and well into the future. By taking our changing environment into account when building homes and utilizing imaginative designs such as this scheme, we are ensuring that we’re creating housing for the city that is sustainable and lasting.”

Steve Birch, Development Manager with SHC, added: “The space and quality that our homes provide is very important to us and our customers. However, it is equally important that SHC developments are thoughtfully designed and create environmentally resilient places for Sheffield’s residents to enjoy both now and in the future.

“This project shows how the building of new housing is able to create improved amenity green space for residents and wildlife, and at the same time ease the strain on the city’s drainage system.”

Since it commenced building, six years ago, SHC has completed almost 1,000 homes across the city, around 80% of which have been sold to first time buyers and families.  It has created 75 apprenticeships, over 800 jobs and spent more than £80 million with local supply businesses.

Over £50,000 has been pledged to public art and community initiatives; £20,000 has been spent supporting local schools and backing for open pathways to work for students, while university links provide graduates with work experience.  There has been sponsorship for, or attendance at, over 20 community events.

A further 1,400 homes are planned by SHC over the next five years – making up to 2,300 two to six bedroomed properties in total, on 26 sites across the city.   This will create further economic stimulation, job creation and community investment for Sheffield. 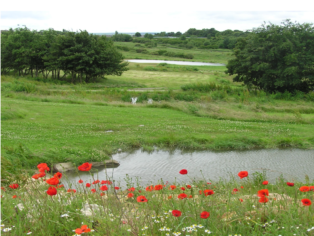